From The CIO’s Desk

From The CIO’s Desk

War in Ukraine and Tail Risks for Global Financial Markets
When Russia Invaded Ukraine on the 24 February, the markets responded negatively with stocks and bonds falling while Oil, Commodities (including Gold) rose.

The decline in stocks lasted about a month but markets reversed from 15th March onwards and stocks recovered strongly for the rest of the month.

The recovery reflected a more sanguine view of the War as Ukraine did much better on the battlefield than had been expected and the fears of a broader escalation evaporated.

However, today’s declaration by Russia that peace talks are over and the war in the East is going to continue is a worrying development.

Russia and its leader need to show that the war has achieved something.  They need this to save face and somehow justify the whole terrible and very expensive War.

This is important as the original plan to take over Kyiv in a few days and install a pro-Russian puppet government has clearly failed.

As many analysts have noted, the Russian objective now is to capture and hold territory in the East and South-East of the country. As is well understood, the Russians want to capture territory to capture a “land bridge” which connects Crimea to Donetsk and Luhansk.

This explains the intensity with which they have attacked the port city of Mariupol and the coming battle will be intensive and very destructive. 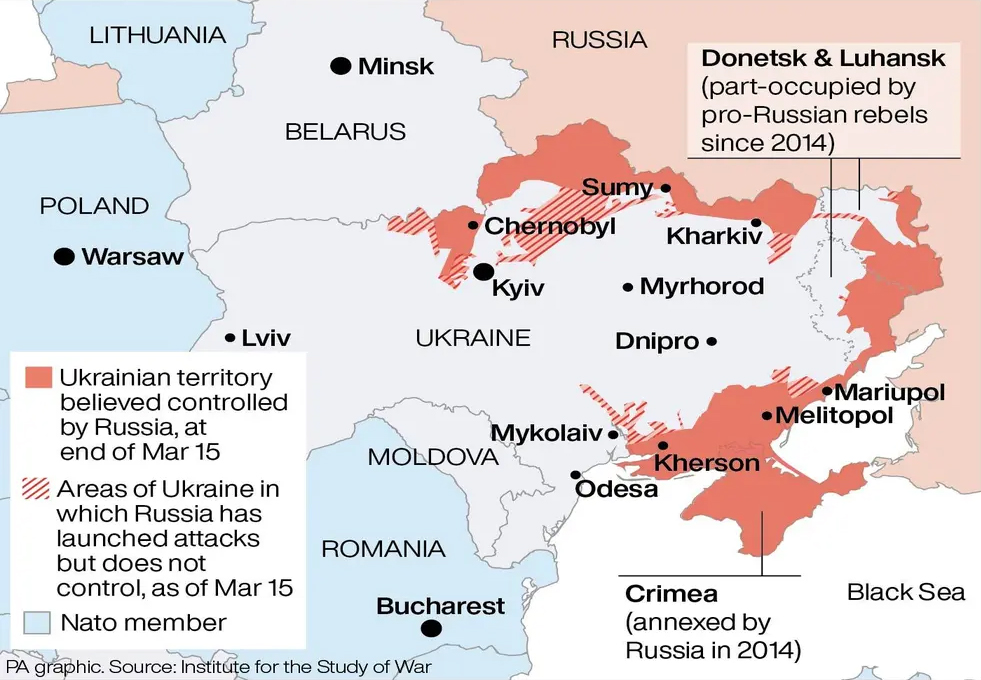 There is a real risk that markets are not appreciating Russia’s determination to prevail. Russia is desperate to achieve this objective and is likely to pursue even more desperate means to achieve them.

They are likely to commit even more troops to the fight in the East and attack with even greater firepower and more ruthless intensity. Press reports  indicate that Putin wants the Russian Force to outnumber the Ukrainian one by a factor of 5 to 1.

There is a small but not insignificant chance that they will use Chemical Weapons (the Ukrainian Azov Regiment has alleged that this has already occurred) and even tactical nuclear weapons which included short-range battlefield missiles.

Clearly this would represent a terrible escalation of the War. It would also represent a tail risk for global markets. Tail Risk can be described as a low probability but high (negative) impact event/s.

This is key; Military analysts may not assign a high probability to the use of tactical nuclear weapons but if they were to be used, the impact on  Portfolios would be highly significant.

In our view, Portfolio Managers should consider buying some insurance to protect their Portfolio against the tail risk described above.

In the event of a Russian attack using tactical nuclear weapons, we anticipate the following: